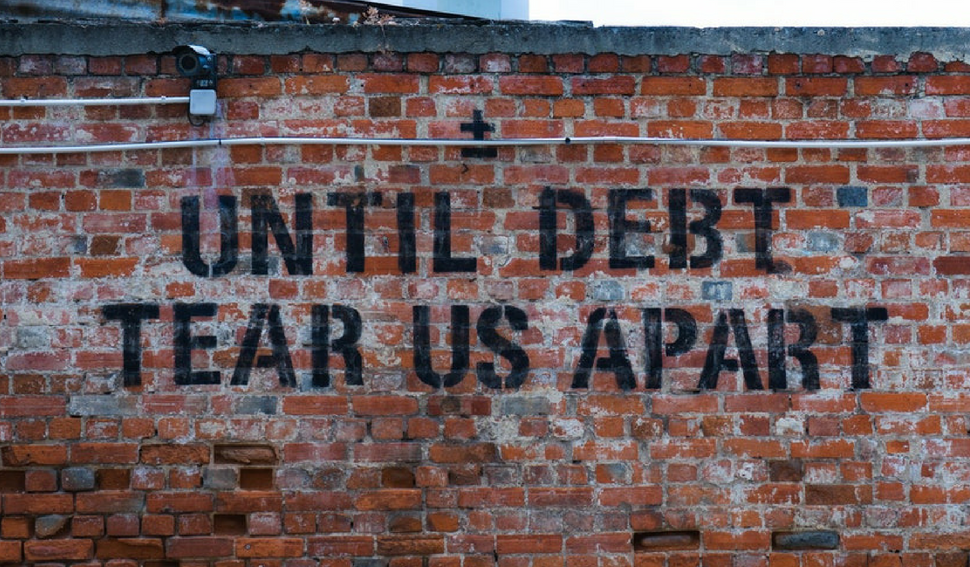 In this Insight, Asia-Pacific Expert Soo-Hyun Lee (Asan Institute, Seoul) comments on the impact of the expiration of the South Korean Corporate Restructuring Promotion Act. While the act has helped major companies restructure in times of economic duress for the past twenty years, it has expired in late June 2018, thus leaving South Korea’s giants without a much-needed financial support.

Asking what ought to be the Korean Government’s economic role (i.e. letting things happen or supporting businesses in difficult times), Soo-Hyun Lee writes that Seoul cannot let go of the Act. Keep reading for more.

South Korea is globally recognized as a market economy in which market needs and developments drive the economic choices of investors. At the same time, the South Korean government has proclivities for economic interventionism.

Very recently, the use of corporate restructuring schemes supported the survival of a globally-reputed giant, i.e. General Motors and its Korea GM manufacturing plants. The involvement of the very public and policy-oriented Korea Development Bank was key in supporting GM. As a result of this interventionist behaviour Korean corporations and their reliance on a forgiving government is becoming famous albeit expected. In turn, South Korea might in fact be gaining a reputation of holding on to its roots as an interventionist market economy globally. The question is, for how long?

Over the past two decades, Korean interventionism has been fuelled by a key piece of legislation named The Corporate Restructuring Promotion Act.

The Act played a major role towards supporting the Korean economy. Simply put, it permitted financially-troubled companies to engage in business recovery proceedings through an out-of-court corporate restructuring process.

As part of what is commonly known as “workouts”, insolvent debtors would have a unique opportunity to discuss terms with their creditors. And they would be permitted to do so outside of complex and stressful legal proceedings that can have a negative impact on all the economic actors involved. When the process becomes overly constraining, creditors and investors tend to panic, which only accelerates the fall of the distressed debtors.

In sum, The Corporate Restructuring Promotion Act has so far played a major role as an economic pillar for the industries and the economy of South Korea.

The end of the Corporate Restructuring Promotion Act?

As of July 2018, however, the future of The Corporate Restructuring Promotion Act is compromised.

The Act was revamped in 2015 and was then given a larger scope of application – mainly regarding the definition of eligible companies and creditors. Yet, the effects of the Act are limited by a time-limitation clause – commonly called a sunset clause – affirming its role as a temporary patch.

The Corporate Restructuring Promotion Act was first enacted in 2001, but it has since then been terminated several times. Each time, it was re-enacted for another period of time, but the last (fifth) version of the Act which came into force in March 2016 is now irrelevant. On 2018 June 30, the South Korean Corporate Restructuring Promotion Act expired. And, with it, so did a crucial aspect of the bond between the Republic of Korea and its powerful economic conglomerates (chaebol).

Korea is now debating the future of the Act.

The Act served as the legal basis for the government and business to enter into a workout agreement, even if the latter already defaulted. This allowed firms to renegotiate terms of their corporate liabilities to avoid bankruptcy, liquidation and/or foreclosure. A major impact from an economic perspective.

Finance ministers and officials in the majority party pushed a motion through the National Assembly. They called for the reinstitution of the Act with, unsurprisingly, considerable support from the private sector.

Their main argument has been that the current state of the Korean economy requires workout options to prevent exacerbating already record low levels of youth employment; only 42% of the people between 15-29 years-old are employed.

In addition to dwindling youth employment, another motivation behind the reinstitution of the Act included a prolonged recession in the shipbuilding and marine industry. That the government would take an involved role in this industry to bolster socioeconomic development was clear from the start. The Moon Jae-in Administration, in fact, quickly used the legal basis provided by the Act to shore up two large shipbuilders: Sungdong Shipbuilding & Marine Engineering Co. and STX Offshore & Shipbuilding Co., Ltd.

The Act is not merely discussed; it also enjoys strong institutional support.

The Financial Services Commission (FSC) of Korea identified the powers granted to the government under The Act as crucial for companies. Hence, it announced on July 2 that it would find a way to extend it.

This confirms South Korean President Moon Jae-in’s shift in direction from his conservative predecessors. Moon maintains a more traditional stance of publicly financing shipbuilding firms. While these are known to be zombie companies, these interventions are consistently considered legitimate. These giants being at the root of historical strategic sectors, allowing these firms to fall into bankruptcy would result in considerable financial fallout for shareholders – the majority holder being the Korean Exim Bank.

More recently, in 2018 May, the government released an ambitious interventionist exercise in industrial policy. It identified five regions in Korea likely to benefit from public support programs including tax exemptions and reductions, financial support, and infrastructure development. Many of the workers in these areas fell victim to cyclical or structural unemployment following dismal economic performance in manufacturing sectors. 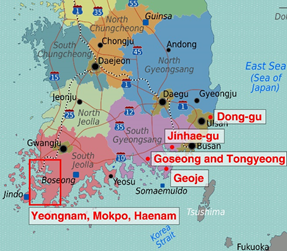 Recent use of corporate restructuring includes General Motors and its Korea GM manufacturing plants. The Korea Development Bank, a policy bank, indeed doubled its investment in Korea GM as part of a negotiated debt-restructuring plan. Investigations into Korea GM found that many of its financial woes originated from mismanagement, accounting and transparency issues. Nonetheless, the government decided to move ahead with reshoring Korea GM… given its anticipated spillover impacts in already economically distressed provinces of the country.

As mentioned already, the Act was introduced in 2001 September, empowering the government to insulate domestic firms against the impacts of the 1997 Asian Financial Crisis.

During that period, a tremendous wave of insolvencies hemorrhaged throughout the economy as foreign currency loans became nonperforming with the introduction of a floating currency. Since then, again, the powers provisioned by the Act were extended five times and served as a vehicle to push forward strategic sectors with public finance.

These extensions took place in periods when GDP growth showed signs of slowing, which incentivized the government to implement restructuring measures on three occasions: from 2001 to 2005, from 2007 to 2010 and from 2011 to 2013. Two additional implementation periods took place in 2014-2015 and 2016-2018 to support shipbuilding and steel production.

These periods are illustrated as dotted lines in Figure 2, which demonstrates the connection between falling corporate debt (as % of GDP) and falling GDP growth rates. 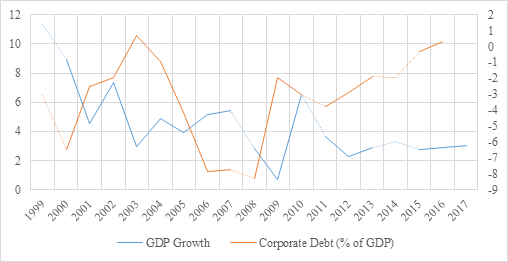 It is difficult to disaggregate general economic performance with the isolated impact of corporate restructuring. Nonetheless, the economic growth following each restructuring has been convincing enough to continue embracing interventionist measures in corporate affairs.

The traditional manufacturing base in steel and shipbuilding faces a period of economic turmoil at the moment. Therefore, the Government’s actions following the expiration of The Corporate Restructuring Promotion Act will be very reflective of Korea’s approach to interventionism in the medium- to long-run.

At the end of the day, the South Korean government does not have much choice. South Korea might be a market economy, but the Government simply cannot let The Corporate Restructuring Promotion Act go.

If the government withdraws the legal basis upon which businesses are able to restructure their debt under government management, there will be two possibilities left. One, it will be left up to these entities to refinance themselves – which they would do already if they could. Two, these companies will go insolvent, pressuring creditors and employees in messy legal proceedings.

Another type of risk would appear if the government withdrew its role in saving these sectors: a financial stability risk. Without the framework created by The Corporate Restructuring Promotion Act, distressed companies will look to alternative modes of finance. Even if these can further destabilize the Korean financial system.

The Bank of Korea showed in its Financial Stability Report (2018 March) that 3,216 highly indebted companies in Korea reached a 100% interest coverage ratio last year. Needless to say, these companies are highly unlikely to repay their debt. In fact, considering that 365 of those companies have not been profitable for seven years. Hence, the risk in terms of financial stability is certain.

These firms have been looking to extend their credit with commercial banks. When that option is unavailable, however, they resort to accepting high-interest loans from non-financial intermediaries. This has been a critical financial challenge for Korea where nonperforming loans and distress in debt service ratios (DSR) show historic rises. Not to mention the further aggravations created by increasing policy interest rates in the United States.

The combination of risk-taking firm-level behaviour, public interest objectives and structural features of the Korean economy illustrates that corporate restructuring is deeply ingrained. While coming at costs and arguably self-perpetuating, corporate restructuring has been a determining factor behind Korea’s dynamic growth and continues to forecast long-run gains.

Opposition party members argue that the Act serves as a springboard for government intervention in business, ultimately blocking the structural adjustment necessary to remain competitive. Whether this ongoing political row results in a curtain call for the Act is uncertain, but it brings up a slightly metaphysical question for Korean economic policy: what should be its role? Until this question is answered, nonetheless, there is little choice left. South Korea cannot afford to let The Corporate Restructuring Promotion Act go. 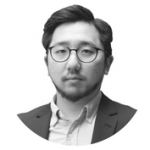 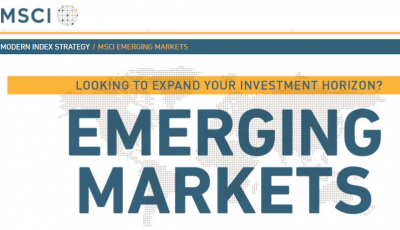 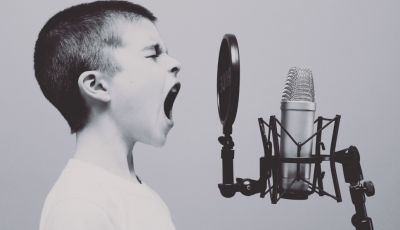